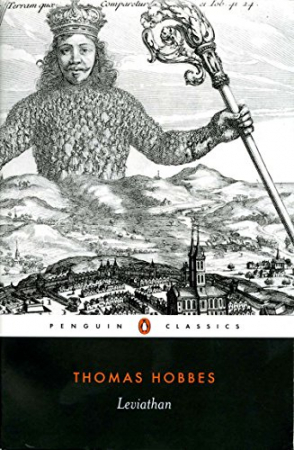 Abstract: Viewing politics as a science capable of the same axiomatic approach as mathematics, Thomas Hobbes's Leviathan retains its appeal for the modern reader, not just in its elevation of politics to a science, but in its overriding concern for peace. This Penguin Classics edition is edited with an introduction by C.B. Macpherson. Written during the turmoil of the English Civil War, Leviathan is an ambitious and highly original work of political philosophy. Claiming that man's essential nature is competitive and selfish, Hobbes formulates the case for a powerful sovereign or 'Leviathan' to enforce peace and the law, substituting security for the 'solitary, poor, nasty, brutish, and short' life he believed human beings would otherwise experience. This world view shocked many of Hobbes's contemporaries, and his work was publicly burnt for sedition and blasphemy when it was first published. But in his rejection of Aristotle's view of man as a naturally social being, and in his painstaking analysis of the ways in which society can and should function, Hobbes opened up a new world of political science. Based on the original 1651 text, this edition incorporates Hobbes's own corrections, while also retaining the original spelling and punctuation, and reads with vividness and clarity. C.B Macpherson's introduction elucidates for the general reader one of the most fascinating works of modern philosophy. Thomas Hobbes (1588-1679) was an English philosopher and political theorist, one of the first modern Western thinkers to provide a secular justification for the political state. Regarded as an important early influence on the philosophical doctrine of utilitarianism, Hobbes also contributed to modern psychology and laid the foundations of modern sociology.