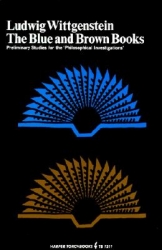 Preliminary studies for the "Philosophical investigations" generally known as the Blue and brown books.

Preliminary studies for the "Philosophical investigations" generally known as the Blue and brown books. - Copie

Abstract: These works, as the sub-title makes clear, are unfinished sketches for "Philosophical Investigations", possibly the most important and influential philosophical work of modern times. The "Blue Book" is a set of notes dictated to Witgenstein's Cambridge students in 1933-1934 and the "Brown Book" was a draft for what eventually became the growth of the first part of "Philosophical Investigations". This book reveals the germination and growth of the ideas which found their final expression in Witgenstein's later work. It is indispensable therefore to students of Witgenstein's thought and to all those who wish to study at first-hand the mental processes of a thinker who fundamentally changed the course of modern philosophy. 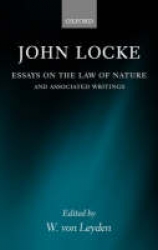 John Locke : essays on the law of nature : the Latin text with a translation, introduction, and notes ; together with transcripts of Locke's shorthand in his journal for 1676 / edited by W. von Leyden.

Abstract: This is the standard edition of John Locke's classic work of the early 1660s, Essays on the Law of Nature. Also included are selected shorter philosophical writings from the same decade. In his 1664 valedictory speech as Censor of Moral Philosophy at Christ Church, Oxford, Locke discusses the question: Can anyone by nature be happy in this life? The volume is completed by selections from Locke's manuscript journals, unpublished elsewhere: on translating Nicole's Essais de Morale; on spelling; on extension; on idolatry; on pleasure and pain; and on faith and reason. The great Locke scholar W. von Leyden introduces each of these works, setting them in their historical context. This volume is an invaluable source for Locke's early thought, of interest to philosophers, political theorists, jurists, theologians, and historians.