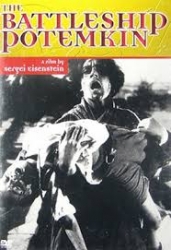 [Restored version with English intertitles] / a Corinth Video release ; restored in the Soviet Union in 1976 ; restoration work supervised by Sergei Yutkevich with the participation of director D. Vasilev ; music by Dmitri Shostokovich.

Abstract: 1905. There is a general feeling of revolution among the Russian populace against the Imperial rulers. This feeling is slow to reach the crew of the battleship, Potemkin. However, the crew eventually does rebel against their Imperial ruled officers for what they see as the poor conditions aboard, namely the provision of maggot infested rotting meat as their food. This mini-revolution on board leads to a confrontation between the officers and crew. News of the result of this confrontation hits the streets of Odessa as the Potemkin sails into port. The fight on board the Potemkin makes its way to the streets of Odessa as civilians want to show their support for their brothers on board. This situation leads to further actions by the Imperial army, both against the Russian civilians in Odessa as well as against the Potemkin crew. Abstract: This Pasolini compendium examines the great Italian director and author's life through a detailed survey of his films. Opening with Accattone (1961) and closing with Salò (1975), followed by a section on unrealized works, Pier Paolo Pasolini: My Cinema devotes a chapter to each of Pasolini's movies, supplementing stills and a wealth of documentary material with extended commentary by Pasolini on each film, in the form of interviews, journal notes, stories and essays, as well as screenplay excerpts. The four unrealized films discussed in the book's final chapter are The Savage Father (1963), Notes for a Poem on the Third World (1968), Saint Paul (1968) and Porno-Teo-Kolossal (1973). Also included are photos by some of the great Italian set photographers: Angelo Pennoni, Angelo Novi, Mario Tursi, Mario Dondero, Mimmo Cattarinich, Deborah Beer, Bruno Brunia and Roberto Villa. The book closes with an album of photographs from the archive of Laura Betti, the actress and singer who was Pasolini's close friend and confidante, which include photos of Pasolini with his mother, and in the company of writers such as Alberto Moravia, Carlo Emilio Gadda and Ezra Pound. Set designer Dante Ferretti, who began his career with Pasolini, contributes a foreword. My Cinema offers the most succinct statement of the director's vision in print.