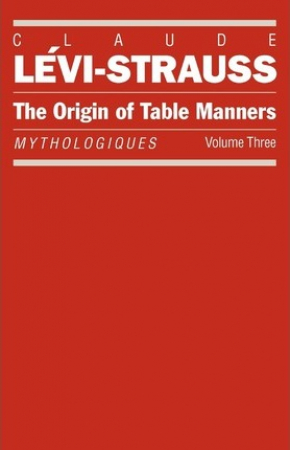 The origin of table manners / Claude Lâevi-Strauss ; translated from the French by John and Doreen Weightman.

The origin of table manners - Copie 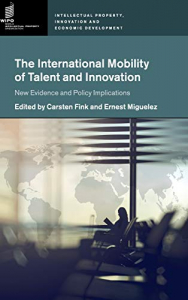 The international mobility of talent and innovation [edited by] Carsten Fink,
0 0 0

The international mobility of talent and innovation - Copie

Abstract: Drawing on fresh data, this book investigates why talented individuals migrate and how they shape innovation around the world. 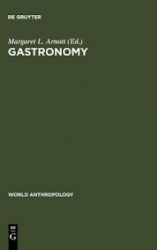 Chicago : distributed in the USA and Canada by Aldine, [1975] 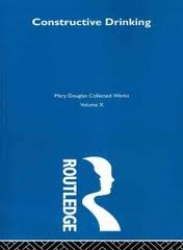 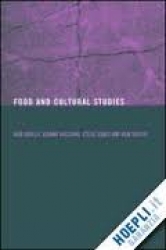 Studies in consumption and markets

Abstract: What and how we eat are two of the most persistent choices we face in everyday life. Whatever we decide on though, and however mundane our decisions may seem, they will be inscribed with information both about ourselves and about our positions in the world around us. Yet, food has only recently become a significant and coherent area of inquiry for cultural studies and the social sciences. Food and Cultural Studies re-examines the interdisciplinary history of food studies from a cultural studies framework, from the semiotics of Barthes and the anthropology of Levi-Strauss to Elias' historical analysis and Bourdieu's work on the relationship between food, consumption and cultural identity. The authors then go on to explore subjects as diverse as food and nation, the gendering of eating in, the phenomenon of TV chefs, the ethics of vegetarianism and food, risk and moral panics. 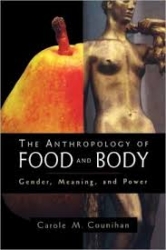 The anthropology of food and body Carole M. Counihan
0 0 0

The anthropology of food and body : gender, meaning, and power / Carole M. Counihan

The anthropology of food and body - Copie

Abstract: The Anthropology of Food and Body explores the way that making, eating, and thinking about food reveal culturally determined gender-power relations in diverse societies. Carole M. Counihan takes a cross-cultural approach to ask compelling questions about eating disorders, body dissatisfaction, bodily changes in reproduction, and gender differences around food. Using ethnographic data from her fieldwork in Europe and the U.S., the author addresses issues around food, culture and gender such as: What powers do women gain and lose through their control of food preparation and distribution? What do food images in children's fantasy stories tell us about their sense of self? How do beliefs about eating and intercourse in different cultures reflect and affect gender ideology? How does the objectification of the female body subordinate women, and how can women challenge it? And how do pregnancy and birth affect women's body image and empowerment? This book brings feminist and anthropological theories to bear on these provocative issues and will interest anyone investigating the relationship between food, the body, and cultural notions of gender. 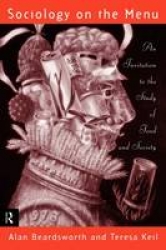 Sociology on the menu Alan Beardsworth and Teresa Keil.
0 0 0

Sociology on the menu : an invitation to the study of food and society / Alan Beardsworth and Teresa Keil.

Sociology on the menu - Copie

Abstract: Sociology on the Menu is an accessible introduction to the sociology of food. Highlighting the social and cultural dimensions of the human food system, from production to consumption, it encourages us to consider new ways of thinking about the apparently mundane, everyday act of eating. This book provides a broad conceptual framework, based on the proposition that the food systems and food consumption patterns of contemporary western societies are the products of the complex interplay of the social forces of change and innovation on the one hand and on those which engender stability and continuity. The main areas covered include the origins of human subsistence, the development of the modern food system, food and the family, eating out, diet and health, food risks and food scares, dieting and the body image, the meanings of meat, vegetarianism and the role of sweetness in the human diet. Sociology on the Menu provides a comprehensive overview of the multidisciplinary literature, focusing on key texts and studies to help students identify the main themes. It urges us to re-appraise the taken for granted and familiar experiences of selecting, preparing and sharing food and to see our own habits and choices, preferences and aversions in their broader cultural context. 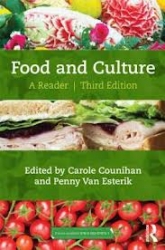 Food and culture : a reader / edited by Carole Counihan and Penny Van Esterik. 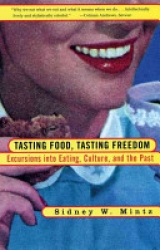 Abstract: A renowned anthropologist explores the history and meaning of eating in America. 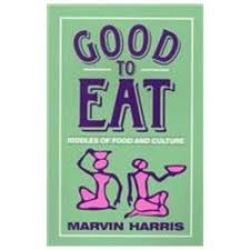 Good to eat : riddles of food and culture / Marvin Harris

Abstract: Why are human food habits so diverse? Why do Americans recoil at the thought of dog meat? Jews and Moslems, pork? Hindus, beef? Why do Asians abhor milk? In Good to Eat, bestselling author Marvin Harris leads readers on an informative detective adventure to solve the world's major food puzzles. He explains the diversity of the world's gastronomic customs, demonstrating that what appear at first glance to be irrational food tastes turn out really to have been shaped by practical, or economic, or political necessity. In addition, his smart and spirited treatment sheds wisdom on such topics as why there has been an explosion in fast food, why history indicates that it's "bad" to eat people but "good" to kill them, and why children universally reject spinach. Good to Eat is more than an intellectual adventure in food for thought. It is a highly readable, scientifically accurate, and fascinating work that demystifies the causes of myriad human cultural differences. 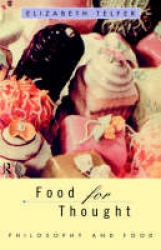 Abstract: Looking at the philosophical issues raised by food this short and accessible book questions the place food should have in our individual lives. It shows how traditional philosophy and its classic texts can illuminate an everyday subject. 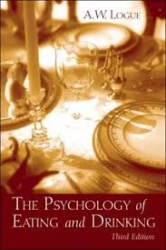 The psychology of eating and drinking A.W. Logue.
0 0 0

The psychology of eating and drinking / A.W. Logue.

The psychology of eating and drinking - Copie

Abstract: Our fascination with eating and drinking behaviors and their causes has resulted in a huge industry of food-related pop science. Every bookstore, every magazine stand, every grocery store checkout counter is filled with publications about how to get your child to eat vegetables, how to tell if someone has an eating disorder or, most commonly, how to lose weight. But the degree to which any of these is based on scientific research is very limited. In contrast to the literature for the general reader, the scientific research on eating and drinking behaviors is usually too technical for the general reader. The Psychology of Eating and Drinking is a unique volume; a textbook that can be comprehended by the general educated reader. Just as in her past editions of this book, Alexandra Logue grounds her investigation into the complex interactions between our physiology, our surroundings, and our eating and drinking habits in laboratory research and up-to-date scientific information. The chapters move from the general -- hunger and thirst, taste and smell, and eating behaviors -- to the more specialized -- overeating and overdrinking, anorexia and bulimia, and alcohol use. In each case, Logue provides a brief synopsis of the most historically influential scientific research and then relates this history to the most up to date advances. This method provides the reader with a general introduction to the physiology of sensations related to eating and drinking and how these sensations are influenced by the individual's social surroundings. The Psychology of Eating and Drinking provides the general reader and student with a biological and psychological framework to understand his or her eating behaviors. 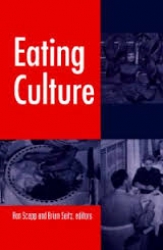 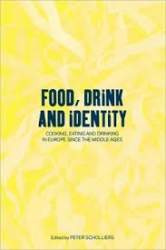 Food, drink and identity : cooking, eating and drinking in Europe since the Middle Ages / edited by Peter Scholliers

Abstract: Food and drink have provided fascinating insights into cultural patterns in consumer societies. There is an intimate relationship between food and identity but processes of identity formation through food are far from clear. This book adds a new perspective to the existing body of scholarship by addressing pivotal questions: is food central or marginal to identity construction? Does food equally matter for all group(ing)s? Why would, in peoples experience, food become especially important at one moment, or, on the contrary, lose its significance? The origin of food habits is also interrogated. Contributors investigate how, when, why and by whom cooking, eating and drinking were used as a means of distinction. Leading historians and sociologists look at concepts of authenticity, adjustment, invention and import, as well as food signs and codes, and why they have been accepted or rejected. They examine a wide range of periods and topics: the elderly, alcohol and identity in Early Modern Europe; food riots and national identity; noble families, eating and drinking in eighteenth-century Spain; consumption and the working class in the nineteenth century; commensality; the meaning of Champagne in Belle-Epoque France; the narrative of food in Norway; wine and bread in French Algeria; food and identity in post-war Germany. This intriguing book brings together new, comparative insights and research that allow a better understanding of processes of integration and segregation, the role of food in the construction of identity, and the relationship between old and new food habits. 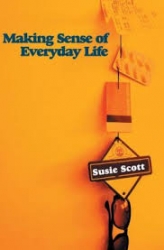 Abstract: "This accessible, introductory text explains the importance of studying 'everyday life' in the social sciences. Susie Scott examines such varied topics as leisure, eating and drinking, the idea of home, and time and schedules in order to show how societies are created and reproduced by the apparently mundane 'micro' level practices of everyday life. Each chapter is organized around three main themes: 'rituals and routines', 'social order', and c̀hallenging the taken-for-granted', with intriguing examples and illustrations. Theoretical approaches from ethnomethodology, Symbolic Interactionism and social psychology are introduced and applied to real-life situations, and there is clear emphasis on empirical research findings throughout. Social order depends on individuals following norms and rules which are so familiar as to appear natural; yet, as Scott encourages the reader to discover, these are always open to question and investigation."

Abstract: Philosophy has often been criticized for privileging the abstract; this volume attempts to remedy that situation. Focusing on one of the most concrete of human concerns, food, the editors argue for the existence of a philosophy of food. The collection provides various approaches to the subject matter, offering new readings of a number of texts - religious, philosophical, anthropological, culinary, poetic, and economic. Included are readings ranging from Plato's "Phaedo and Verses of Sen-No-Rikyu" to Peter Singer's "Becoming a Vegetarian" and Jean-Franiois Revel's "Culture and Cuisine". This reader will have particular appeal for philosophers working in social theory, feminist theory, and environmental ethics, and for those working on alternative approaches to such traditional subject areas as epistemology, aesthetics, and metaphysics. 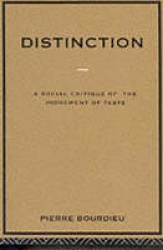 Distinction : a social critique of the judgement of taste / Pierre Bourdieu ; translated by Richard Nice

Abstract: No judgement of taste is innocent - we are all snobs. Pierre Bourdieu's Distinction brilliantly illuminates the social pretentions of the middle classes in the modern world, focusing on the tastes and preferences of the French bourgeoisie. First published in 1979, the book is at once a vast ethnography of contemporary France and a dissection of the bourgeois mind. In the course of everyday life we constantly choose between what we find aesthetically pleasing, and what we consider tacky, merely trendy, or ugly. Taste is not pure. Bourdieu demonstrates that our different aesthetic choices are all distinctions - that is, choices made in opposition to those made by other classes. This fascinating work argues that the social world functions simultaneously as a system of power relations and as a symbolic system in which minute distinctions of taste become the basis for social judgement.