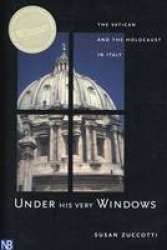 Under his very windows Susan Zuccotti.
0 0 0

Under his very windows : the Vatican and the Holocaust in Italy / Susan Zuccotti.

Under his very windows - Copie

Abstract: Pope Pius XII has often been criticized for his silence during the extermination of European Jewry during World War II. In his defense, some have alleged that the pope was doing a great deal to help the Jews but that his efforts were necessarily behind the scenes. This meticulously researched and balanced book examines exactly what the pope, his advisers, and his assistants at the Vatican Secretariat of State did to help the Jews of Italy. It finds that they did very little. The book begins by discussing prewar Vatican and Jesuit publications, in which Zuccotti uncovers a hitherto unsuspected prevalence of anti-Jewish sentiment. These publications, along with archival documents, indicate that Vatican protests against Italian anti-Jewish laws were limited to measures affecting converts and Jews in mixed marriages with Catholics, as was help with emigration; the papal nuncio's visits to foreign Jews in Italian internment camps did not differ from those to non-Jews and in no way eased their material discomfort; and interventions by diplomats of the Holy See for Jews threatened with deportation were rare, always polite, and seldom decisive. Above all, Zuccotti finds no evidence of a papal directive to church institutions to shelter Jews and much evidence to suggest that the pope remained uninvolved. The notion that Pius XII was benevolent and helpful to Jews behind the scenes proves to be a myth. 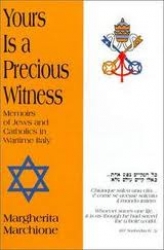 Yours is a precious witness Margherita Marchione.
0 0 0

Yours is a precious witness : memoirs of Jews and Catholics in wartime Italy / Margherita Marchione.

Yours is a precious witness - Copie

Prisoner of the Vatican David I. Kertzer.
0 0 0

Prisoner of the Vatican : the popes' secret plot to capture Rome from the new Italian state / David I. Kertzer.

Prisoner of the Vatican - Copie

Papacy and politics in eighteenth-century Rome : Pius VI and the arts / Jeffrey Collins.

The deputy. Translated by Richard and Clara Winston. Pref. by Albert Schweitzer.
0 0 0

The deputy. Translated by Richard and Clara Winston. Pref. by Albert Schweitzer.

The deputy. Translated by Richard and Clara Winston. Pref. by Albert Schweitzer. - Copie