Studies in the philosophy of Kant Lewis White Beck.
0 0 0

Studies in the philosophy of Kant / Lewis White Beck.

Studies in the philosophy of Kant - Copie

Abstract: Written by eminent scholars, this collection of essays on the reconstruction and critique of Kant's transcendental philosophy in the Indian context specifically discusses his ideas on perpetual peace, universal history, and critical philosophy. 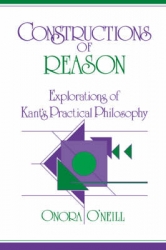 Abstract: Two centuries after they were published, Kant's ethical writings are as much admired and imitated as they have ever been, yet serious and long-standing accusations of internal incoherence remain unresolved. Onora O'Neill traces the alleged incoherences to attempt to assimilate Kant's ethical writings to modern conceptions of rationality, action and rights. When the temptation to assimilate is resisted, a strikingly different and more cohesive account of reason and morality emerges. Kant offers a 'constructivist' vindication of reason and a moral vision in which obligations are prior to rights and in which justice and virtue are linked. O'Neill begins by reconsidering Kant's conceptions of philosophical method, reason, freedom, automony and action. She then moves on to the more familiar terrain of interpretation of the Categorical Imperative, while in the last section she emphasises differences between Kant's ethics and recent 'Kantian' ethics, including the work of John Rawls and other contemporary liberal political philosophers. This reassessment will add significantly to the understanding of Kantian practical philosophy.