Uses of the other : "The East" in European identity formation / Iver B. Neumann.

Uses of the other - Copie 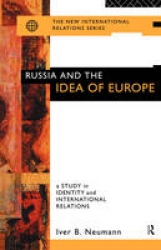